Introductory Chemical Dynamics: Using the Chemical Potential from the Start

Chemical processes -those associated with the transport, change, and reaction of substances- open up a rich world of phenomena which is just as interesting for physics as it is for chemistry or biology. Historically, the wealth of phenomena has led to a plethora of forms of description. Largely through the work of Georg Job, it has become clear in recent years that descriptions can be unified if the chemical potential is given its proper relevance in models of chemical change. To make use of the power of the chemical potential in describing chemical phenomena, the concept should be introduced from the beginning in any course of chemistry or chemical physics. It is equally important to motivate this construct intuitively and not make it a quantity derived laboriously from other seemingly more basic ones. In this paper, we present and discuss a number of phenomena whose description suggests the existence of a unifying concept of chemical driving force. Using analogical reasoning, i.e., by comparing descriptions of chemical processes to theories of fluids, electricity, or heat, we see that the driving force can be conceived of as the difference of the chemical potential of the species involved in transports or reactions. It will be demonstrated how the idea of the chemical potential and its difference can lead to rather simple yet powerful models of chemical change. 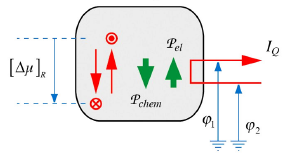