Towards a Potential Energy Surface for the SO3( 3A); Quasiclassic study of the Reaction S(3P)+O3( 1A1)

A Potential Energy Surface for the SO3 in the lowest triplet electronic state, using the double many body expansion (DMBE) method is presented. Previous functions reported for diatomic and triatomic fragments, obtained by the same method, as well as four-body electrostatic energy term considering the long range interactions were employed. The so obtained PES reproduces the asymptotic limits and predicts some stable configurations previously reported from molecular orbital ab-initio calculations (as the global minimum in D3h symmetry) and experimental results. Such a sixdimensional function was characterized describing the properties of stationary points and some of the reaction mechanism taking place on it. The reaction S(3P)+O3 (1A1) was studied using the PES and the quasiclassic trajectories method, being formation of SO+O2 the favored process. The excitation function shows a capture type behavior for the low energies. Details for reaction mechanism and rate constant are also presented. 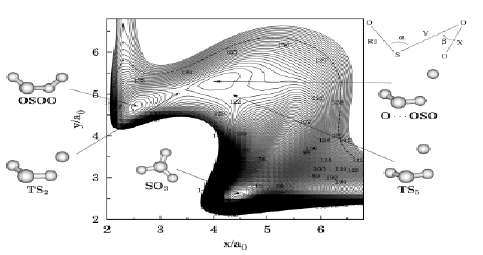