Light Depolarization in the Scattering of Light by Rough Cylindrical Surfaces

Starting from linearly polarized light, the change of state of polarization (depolarization) is studied in the scattering of light by rough stainless steel cylinders and by mirrored cylinders as well. Experimental curves of intensity of depolarized light vs. observation angle are obtained. These data indicate a correlation between the increase of roughness and the variation of the measured value of intensity of light scattered in the specular-reflection direction on the global incidence plane, the plane formed by the incidence direction and the cylinder axis. Information obtained from the mirrored cylinder is compared to the results of a geometrical optics-based numerical model. In the case of rough cylinders, the experimental data are compared to the results of the numerical resolution of an integral expression for the scattered field using the Kirchhoff’s vector theory. The experimental and numerical plots have similar shapes, although differences between measured and calculated values of intensity on the global plane of incidence, and near of it, are observed. The relation between these differences and multiple-scattering and shadow effects is analyzed. These effects are not considered in the used Kirchhoff’s theory 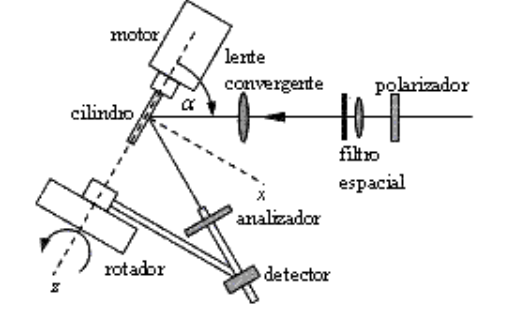